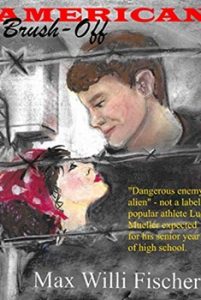 It’s 1942, and seventeen-year-old Lud Mueller is an All-American boy. He’s got it all—looks, athletic ability, popularity and the sweetest girl between Chicago and New York. Now, the only country he’s ever known has a plan to tear his life to pieces without giving him a fighting chance. The clouds of fear have gathered into the storms of bigotry throughout the United States. Innuendo has replaced due process.
Labeled a “dangerous enemy alien” in his hometown, Lud Mueller learns his deliverance depends upon his wit trumping his brawn. Interned in the Texas desert, he and his family become pawns in a secret World War II strategy. This isn’t what he expected for his senior year of high school.
While a few Nazi wannabes try to make life miserable for him and his family, Lud finds romance in the Texas heat only for it to be scorched by the government.
When the war ends, Lud has changed, but the government’s wishes for him have not.
American Brush-Off is based upon the internment of thousands of legal German aliens and German-Americans during World War II.

Author Bio:
Born and raised in an immigrant family, Max Willi Fischer has always had an interest in history. A retired middle school teacher, he enjoys writing about the ironies that occur in history. His first novel, The Corkscrew App, was published by Royal Fireworks Press in 2016. He’s also published several short stories. When not writing, he enjoys travel, reading and home-improvement projects.